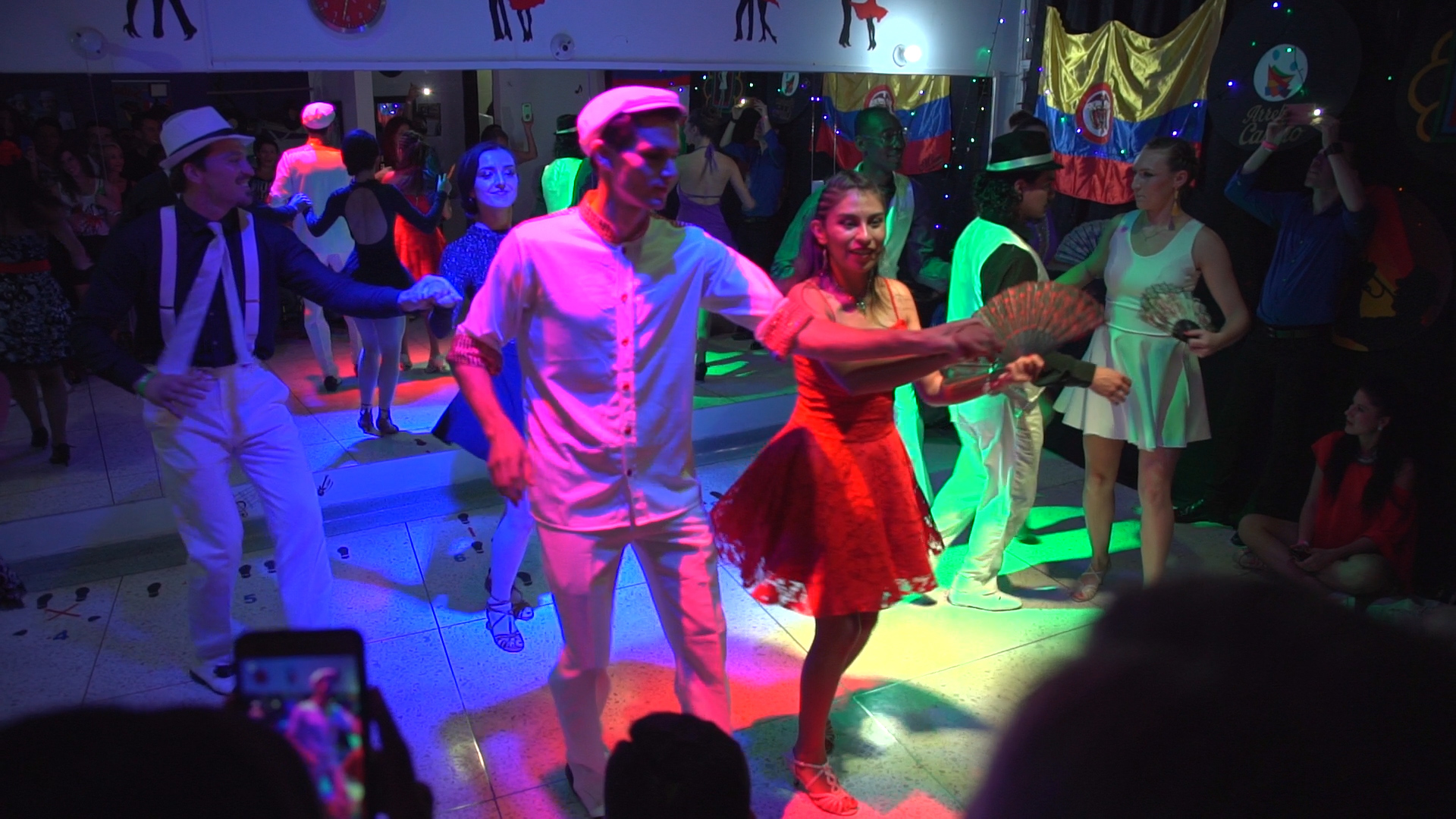 There are happy ones, there are quiet ones, there are mestizos, and there are mulattoes. The multiculturalism that is found throughout the territory of Colombia is also reflected in its different rhythms and typical dances.

Colombians are party people by nature, regardless of the region or climatic floor in which they are. The body movements vary according to the type of music. In the north region of the country percussion and heat give place to strong and uninhibited dances. The Andean region’s strings and winds inspire more subtle, timid and calmer steps. Cultural expressions in Colombia – both traditional and contemporary dance – are a way of life.

This Latin dance is well known throughout the world. Cali-Style Salsa, also called Colombian Salsa, is based on geographical location of the Colombian City of Cali. Cali is also known as the “Capital de la Salsa” (Salsa’s Capital); due to salsa music being the main genre in parties, nightclubs and festivals.

The elements of Colombian Salsa were strongly influenced by dances to Caribbean rhythms which preceded salsa, such as “Pachanga” and “Boogaloo”. Cali has the most salsa schools and salsa teams in the world. Many of the competitions are held in Colombia.

The central feature of this style is the footwork which has quick rapid steps and skipping motions. The technique is very precise, helping several Colombian Style dancers win major world championships. Cali hosts many annual salsa events such as the World Salsa Cali Festival, among others.

Is a new Colombian salsa style, it’s a mix from traditional salsa and urban sound, appearing for the first time on the Pacific coast and is inspired by African rhythms. This modern salsa style is the perfect rhythm to start parties and celebrations. The first records that came out of this new genre were “Chichoki”, “La Tusa” and “Bien Pegaito”. The growth of the new urban style continues today.

The word “cumbia” is derived from the African cumbe, which means dance. It represents a blending of cultures both musically and rhythmically during the 17th century when African slaves were brought to Colombia by the Spanish.

Cumbia is one of the most melodic representative expressions of Colombia. It brings together three cultures: African, Indigenous and European. The African influence gives the rhythm of the drums while the Indigenous based flute blends in the melody. The European influence provides some variations in the melodies, choreography and costumes of the dancers.

Many bands from different genres have re-created great performances with arrangements using modern instruments such as the clarinet, bongo drums, horns and even piano. Vallenato artists have blended their own form of the music integrating the accordion into cumbia music.

Vallenato literally means “born in the valley”. The valley influencing this name is located between the Sierra Nevada de Santa Marta and the Serranía de Perijá in northeast Colombia. The name also applies to the people from the city where this genre originated: Valledupar. In 2006, Vallenato and cumbia were added as a category in the Latin Grammy Awards. Colombia’s traditional Vallenato music is Intangible Cultural Heritage in Need of Urgent Safeguarding, according to UNESCO.

Many Colombians say that Vallenato is the best representation of Colombian Culture with the accordion brought from Europe, “the caja” from Africa and “the guacharaca” representing the Indigenous Culture.

Merengue dance steps are very popular among social dancers, and they can be very fun and simple to learn. Merengue is a combination of two dances, the African and the French Minuet, from the late 1700’s – early 1800’s. Today this dance style has come to be perceived as a child of the Dominican Republic for a number of reasons. But contrary to popular belief, merengue’s early history locates it to multiple sites across the Caribbean:

In Puerto Rico, Cuban marching bands introduced “the upa” around 1842 which later became known as the merengue. Both Colombia and Venezuela developed their own versions, from the late 1800s through to a peak in the 1930s. They were performed more in the coastal areas which hint at an outside influence, but their precise origins remain unclear.

String instruments, “güira” and percussions build the melodious rhythm of this fun dance similar to salsa.

Champeta was strongly inspired by African rhythms and dances, born on the Caribbean coast of Colombia. This musical genre in itself is a social phenomenon in the streets of Cartagena de Indias. The champeta is danced alone or in couple, and it is a movement of the sensual body that represents a form of seduction.

Colombia is well known for its beautiful landscapes, its people and especially its rhythms recognized by the whole world.

Exploring Colombia can be more exciting when you learn how to communicate with locals. Centro Catalina Spanish School offers you the opportunity of taking a Spanish course to learn the language in a very comfortable atmosphere. It also promotes an ideal space to practice and connect with other students that are part of a community – local and foreign – interested in discovering Colombia, and connecting with the culture. Centro Catalina is located in Cartagena and Medellín.

And as a part of the Colombian experience, you will get to try the adventure of learning to dance some of these exotic rhythms at “Salsa Explosión Latina Dance School”, which is a part of Centro Catalina Spanish School, and is located in Cartagena city.

Friendly teachers are trained to make Colombian dancing easy and fun. They’re also available to take you to the best night clubs and bars, and to be your city guides at different events. It is quite an unforgettable experience!